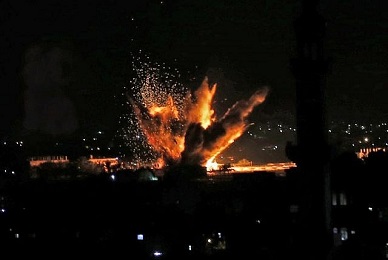 Yisrael Beytenu chairman Avigdor Liberman announced Wednesday that he would be resigning as defense minister and called for the government to be dismantled and for new elections to be set.

“I am here to announce my resignation from the government,” he said at a hastily organized press conference at the Knesset after a Yisrael Beytenu party meeting, during which he told MKs of his decision.

Liberman said his decision came in light of the ceasefire reportedly agreed on Tuesday between Israel and Palestinian terror groups in Gaza following an unprecedentedly fierce two-day barrage of over 400 rockets fired by Hamas and other terror groups toward Israel.

A day earlier, Liberman and other ministers severely criticized Prime Minister Benjamin Netanyahu over the decision.

“What happened yesterday, the ceasefire, together with the deal with Hamas, is a capitulation to terror. There is no other way of explaining it,” he told reporters on Wednesday.

“What we are doing right now is buying quiet for a heavy price with no long-term plan to reduce violence toward us,” he said of the deal, which wasn’t officially confirmed by Israeli officials. He also slammed the military’s response to the rocket fire. “To put it lightly, our response was drastically lacking to the 500 rockets fired at us,” he said.

Liberman also directly criticized Netanyahu, saying he “fundamentally disagreed with him” on a number of key issues, including the government’s allowing $15 million to be transferred in cash from the Qatari government to Hamas on Friday.

“I opposed it. The prime minister needed to write an executive order for it to go above my head,” Liberman claimed, saying that the money went first to the families of Hamas members killed on the Gaza border in clashes with the IDF and then to funding for rockets to fire at Israel.

He said that he made his decision because “I could not remain [in office] and still be able to look residents of the south in the eyes.”

Liberman concluded his prepared statement by calling for elections to be held “at the soonest possible date.”

During a subsequent question-and-answer session he predicted that right-wing voters would “see through the other parties’ hypocrisy” and reward his Yisrael Beytenu party with 20 Knesset seats.

A Likud source said in response that there was “no need to go to elections at this time of sensitive security,” despite the coalition losing five seats with Yisrael Beytenu’s expected exit.

“The government can complete its term,” the Likud source said in a statement. “In any case, in the meantime, the defense portfolio will go to Prime Minister Netanyahu.”

The deal has provoked criticism from within Netanyahu’s government as well as from Israelis who live near the Gaza Strip and want further action against Hamas, the terror group that rules the enclave.

Sources close to the defense minister told Haaretz that he was “incensed” by a briefing in which Netanyahu appeared to indicate that Liberman supported the reported ceasefire. The security cabinet reportedly agreed to the ceasefire with Hamas on Tuesday afternoon, in a decision that several cabinet ministers later said they opposed. The decision was slammed by some opposition leaders, who called it a capitulation to terror after a deadly two-day conflagration that saw over 400 rockets and mortar shells fired at southern Israel.


All the views expressed in, and at the source of, this article may not necessarily reflect those of T.E.A. Watchers.
Click article heading to go to article source.
back to top