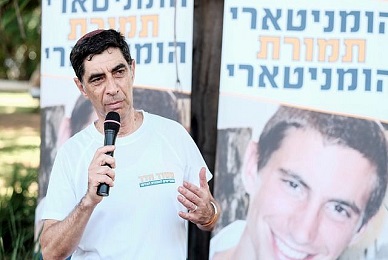 Avigdor Liberman tells a press conference in Jerusalem that his five-seat Yisrael Beytenu party is leaving the coalition effective immediately.

The move leaves Prime Minister Benjamin Netanyahu’s coalition with a razor-thin majority of just 61 lawmakers in the 120-member Knesset, plunging the legislature into turmoil that could lead to early elections.

The family of an IDF soldier whose remains are being held in Gaza by the Hamas terror group praises outgoing Defense Minister Avigdor Liberman’s comments explaining his decision to resign.

In his remarks, the defense minister specifically cited the importance of bringing back the remains of Lt. Hadar Goldin and Staff Sgt. Oron Shaul and the living Israeli civilians, Avera Mengistu and Hisham al-Sayed, who are being held in Gaza.

“We thank Minister Liberman for his strong and determined stand with us during his tenure and especially recently,” Goldin’s family says in a statement.

“There can be no agreement [with Hamas] without the return of the [fallen] soldiers and the civilians. The responsible for this lies solely on the shoulders of Prime Minister [Benjamin] Netanyahu,” the family adds.

The Jewish Home party is demanding the defense portfolio following Avigdor Liberman’s resignation as a condition for staying in Benjamin Netanyahu’s coalition.

“Now is the time to entrust Naftali Bennett and Jewish Home with the defense portfolio,” Shuli Mualem, head of the Jewish Home Knesset faction, says. If party chief Naftali Bennett isn’t appointed defense minister, the party “won’t continue being part of the government.”

Opposition leaders use Avigdor Liberman’s stepping down as defense minister to slam the Netanyahu government and to call on the prime minister to resign as well.

Zionist Union chair Avi Gabbay welcomes Avigdor Liberman’s resignation as defense minister, saying, “That’s how it should be. You failed at the job — you resigned,” and adding that Netanyahu should follow suit. “There is no security for the residents of the south, and therefore the prime minister must also resign. He is responsible for security just like the defense minister,” Gabbay charges in a statement released immediately after Liberman’s announcement.

“Let’s go to elections,” he says, promising that he will be able to “restore security.”

MK Yair Lapid, head of the Yesh Atid party, says Liberman’s resignation “reinforces the fact that the prime minister caved to terror at the expense of the residents of the south.”

The Hamas terror group calls Liberman’s resignation an Israeli “recognition of its defeat at the hands of the Palestinian resistance.”

Today’s announcement constitutes a “victory for Gaza” after it managed to “stand up to the occupation,” Hamas spokesperson Sami Abu Zuhri says in a statement.


All the views expressed in, and at the source of, this article may not necessarily reflect those of T.E.A. Watchers.
Click article heading to go to article source.
back to top