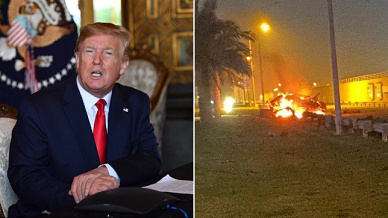 The phrase ‘World War 3’ began trending after the killing of the Iranian leader’s second in command in a US airstrike. Iranian general Qasem Soleimani was killed in a bombing ordered by President Donald Trump overnight at Baghdad Airport. After news of his death broke, the country’s supreme leader Ali Khamenei sparked fears of war after he promised ‘harsh vengeance’. Many of those tweeting about the airstrike used memes to bring light to the situation, joking about fears it could spark ‘World War 3’ – a phrase now trending on Twitter. Searches for ‘World War 3’ also spiked on Google within hours of the airstrike in Iraq overnight. Google Trends recorded ‘Iran’ as the second most searched term in the United States, with more than 500,000 searches for the topic.

Though much of the comments online mock hysteria surrounding a ‘world war’, there are real fears of repercussions following Soleimani’s death. In a tweet, Iran’s leader Ayatollah Khomeinei said the ‘criminals’ responsible had ‘his [Soleimani] and other martyrs’ blood on their evil hands’. He added: ‘God willing, his work and his path will not be stopped.’ The dramatic attack came months of tensions between the US and Iran in which Tehran shot down an American military surveillance drone and seized oil tankers. This week, Mr Trump blamed Iran for a protest in Iraq which saw demonstrators break into the US embassy in Baghdad and torch the place.

Pictures of the embassy’s burned out wreck later emerged, with Mr Trump declaring Iran ‘will pay a very big price’. The US also blames the country for a series of attacks targeting tankers, as well as a September assault on Saudi Arabia’s oil industry that temporarily halved its production. The tensions take root in Mr Trump’s decision in May 2018 to withdraw the US from Iran’s nuclear deal with world powers, struck under his predecessor, Barack Obama. Soleimani was the target of Friday’s US attack, which was conducted by an armed American drone, according to a US official. His vehicle was struck on an access road near the Baghdad airport, killing him and eight others.

A senior Iraqi security official said the airstrike took place near the cargo area after Soleimani left his plane to be greeted by al-Muhandis and others. The official said the plane had arrived from either Lebanon or Syria. The US president was holidaying on his estate in Palm Beach, Florida, at the time of the strike, but sent out a tweet of an American flag.