'Will I be next?' Terror of life as a Christian in Egypt REVEALED 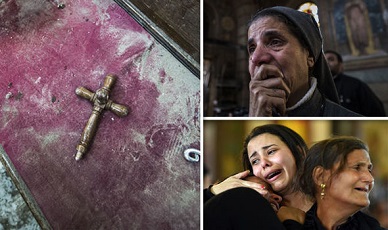 A BRAVE businessman has revealed the horror of life as a Christian in Egypt amid a growing number of attacks by Muslim extremists.

The father-of-two, who spoke to Express.co.uk using a false name due to fears for his safety, said Christians in Egypt were terrified at the growing number of attacks.

‘Michael’ said 2017 had been the worst year on record for Christian persecution, with more than 130 worshippers slaughtered inside churches.

And last month gunmen opened fire on a church in Cairo, killing nine people including a police officer who raced to the aid of worshippers.

Christian persecution watchdog Open Doors revealed Egypt has risen to 17th in a table of the world’s worst places to be a Christian after a year of bloodshed.

They said Egypt is now facing an “unprecedented” level of persecution with the country’s Coptic Christian population, which numbers around 10 million, being targeted in numerous attacks from extremist Muslims.

Amid a rise in radicalised Muslim, Michael said Christians attending the many funerals of victims were all thinking the same blood-chilling thing.

He told Express.co.uk: “It brings about a lot of concern and fear in the hearts of many Christian families. When people put themselves in the shoes of those who have been killed, they think ‘could I be next?’

“It is bringing a lot of concern and fear. Some Christians are asking their children to stay at home during special occasions in fear of possible attacks.”

He said the number of attacks on Christians was growing in Egypt due to a rise in extremism.

The man, who works in the travel industry in Cairo, said: “The way Christians in Egypt are viewed as generally: 'Christians are infidels, corrupt'.

“That mindset is embedded in the minds of many Muslims in Egypt. When we talk about extremist Muslims in particular, they are the ones who want to clearly stand against Christians, to treat them badly, or even in many cases to attack them violently because of them being Christians.

“Since I was a child I have bared a lot of experiences where I was not violently attacked but I have definitely been discriminated against. My wife, my father, my mother, because of that radical mentality.”

He said Christians were shocked by the increase in violence but remained hopeful - despite the bloodshed and fear.

He said: “It is an interesting phenomena. Churches are completely packed with Christians, even when we are not sure what can happen. We just celebrated another Eastern Christmas, it was very joyful celebrating Christmas.”

“The way the Christian community reacted to different attacks was phenomenal. In other countries Christians decide to take guns and fight back. But after one attack after another they continue to pray and forget and forgive - even pray for the attackers.

“Even mothers coming on television testifying how they are sad for their daughters or sons to have been killed but they pray for the attackers. It is mind blowing.”

He said he believed Egypt could one day reach a point where Muslims and Christians lived and worked together peacefully but only if government-level calls for calm were replicated across the country.

He said: “Our government is on the top level has shown a lot of sympathy but I think if there is any positive change it must come from the bottom. We need a change of culture on the bottom level, the level that is close to every day life.

“I really feel for our leaders. There are a lot of struggles going on. We share borders with many troubled countries.

“My hope is social change, to help people to realise that Christians and Muslims can actually live together, in a small village or small town, Christians can work and live peacefully with their Muslim neighbours.”