In what could be yet another symptom of climate change, residents of Nootdorp in the Netherlands woke up to a strange phenomena today: A normally pristine river had turned a bloody red color.

The cause of the red waters behind Pub 1837 in Nootdorp is almost certainly a natural bacteria or algae, says spokeswoman Inka Vogelaar of the Delfland Water Board. Although authorities say there has been no ill effects on fish, people in the area have been advised to avoid the water.

Bodies of water turning red is not a new phenomena and has been reported in other areas around the world recently. Researchers believe the red waters are linked to a rise in bacteria and rare algae blooms, another symptom of our changing and warming climate. 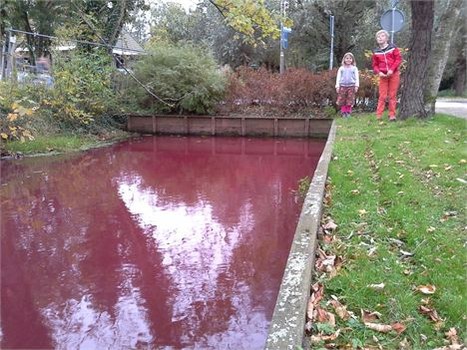 In an important paper published in 2008, Stephanie Moore, an expert on toxic algae with NOAA, highlighted the concerns in the scientific community about how ocean acidification, the ugly step-child of climate change, could contribute to the rise of toxic algal species:

“A more acidic environment would favor, among others, the dinoflagellates – the group of phytoplankton to which most harmful algae belong,” Moore wrote.

Trainer, a co-author on the paper, suggests we may be entering a “dinoflagellate regime.”

There have been other recent incidents of water turning red, one happening in Australia of last year, except this time it was on a beach: The crimson tide: Tourists in Australia flee as Bondi Beach turns into the 'Red Sea' because of rare algae bloom.

Last year residents in China close to the Yangtze river woke up to a big surprise when the huge river had turned into a sea of red: Yangtze River Turns Red and Turns Up a Mystery.

Although not every instance of water turning red may be caused by a toxic algae bloom, recent reports by the NCCOS say this about the strange phenomena that seems to keep popping up in recent years:

Sometimes referred to as a "red tide", these events usually occur in estuaries and along the coastlines, although they can also occur in fresh water.

Scientists are examining the latest red water event in the Netherlands to try and determine a cause.


All the views expressed at the source of this article may not necessarily reflect those of T.E.A. Watchers. Click here to go to article source.
back to top