To listen to article, select text and press play. 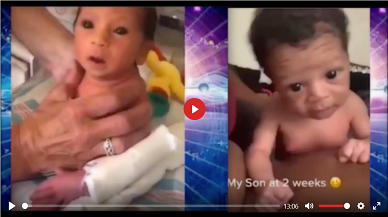 Ricardo Delgado: As promised, I'll show you the video of these births... children whose parents were vaccinated at the end of December 2020 and the beginning of January 2021. Before conception, logically, before pregnancy and childbirth.

So, what we're seeing is that these children have sort of a syndromic effect. They have several characteristic features, such as the blackish color of the eyes when they're usually light when they are born. Then they acquire the color they're going to have when the retina and the iris are formed.

But let's proceed to see the images, and you judge according to what you see.

It's as if there was premature aging. And, physical qualities that should be seen at a year or a year and a bit, these babies already express them at very early ages, such as attempts to crawl at 2 weeks. Things that aren't normal. Apart from those black eyes, which is not exactly normal.

We have shown, in the beginning, a video a bit worrying on the subject of the 'black eyes,' as they call the children born in 2021. Babies born after the previous vaccination of the parents. And what you see... Well. As we say, we're taking these cases 'with a pinch of salt,' until we have more material to give more credibility to the subject.

But what we observe is as if there were an aging or premature development in them. Children of 3 months can walk, for example, when the normal is from... I think the closest month that I have seen is nine or ten. Something like that.

But the eyes, indeed, attract a lot of attention. And it's necessary to observe everything related to these children to know what kind of children are being born after vaccination.

Viewer discretion is advised. (There is one curse word at the beginning of video)


All the views expressed in this video may not necessarily reflect those of T.E.A. Watchers.
back to top